Did you know that November 7 is National Notary Public Day? Yup that’s right; we Notary Publics have our very own day. So in honor of the upcoming special day—which was chosen as National Notary Public Day in recognition of the day that America’s first notary, Thomas Fugill, was appointed—I’ve decided to take you guys on a little journey back into the history of the Notary Public…
As with most things in the modern world, the origins of notaries can be traced back to Ancient Egypt; but the true ancestors of notaries came from the Roman Empire. The early notaries from the Roman Empire were actually a lot like modern day stenographers. A clerk of Cicero developed a form of shorthand which was called “nota” so the clerks that used this short hand were known as “notarius” and these were the first documented notaries. The distinction between notaries and stenographers became clearer as the Roman Empire grew and notaries began serving to prepare contracts, wills and other important documents.
The position of the notary public continued to grow and thrive throughout the Dark Ages and the Renaissance in European countries that based their legal systems in Civil Law. Notaries were not introduced in England, however, until the late 13th and 14th centuries. In the early days of English notaries many of them were members of the clergy. But as time went on members of the clergy stopped involving themselves in secular business, and everyday townspeople began taking on the duties of a notary. The laymen notaries of England were the first to shape the job of a notary as we know it today. 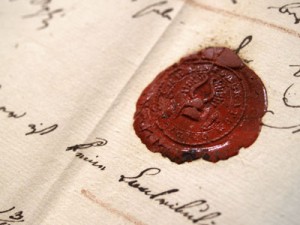 The notaries of Colonial America are said to have contributed heavily to the success of American business. In Colonial America, only those with a high moral character were appointed as public notaries; similar to modern notaries, they were charged with certifying and keeping documents safe. Notaries were, and still are, considered to be honest third parties who were/are invaluable players in the authentication and recording of important official documents.
Throughout many eras, and within many countries, notaries have continued to play an important role in society. I am proud to be a mobile notary public and I will certainly be celebrating National Notary Public Day this Saturday. If you have a traveling notary in your life, be sure to wish them a happy day. And don’t forget, if you’re looking for a great notary public in Los Angeles be sure to give My Mobile Notary LA a call for fast, friendly service with a smile.

Review Us in Yelp!

Call or Text: 818-468-6197 310-904-9607 E-mail: mymobilenotaryla@gmail.com Mobile and Traveling Notary Services Serving ALL of Los Angeles, the San Fernando Valley, Santa Monica and Surrounding Areas. Open 24/7. You won't find a faster, more convenient, reliable and personable mobile or traveling notary service in all of Los Angeles. We Guarantee it!